In a place far, far away from where I am, lives a boy whose smile has touched me in a way that he would never know…About five years ago, I visited a primary school in Oltukai, Tanzania. It was part of an academic trip for a grad course I was taking. Essentially, the purpose of the trip was to get a firsthand understanding of how tourism could contribute to the economic development of a developing country. It had nothing to do with getting involved in a community or volunteerism project. However, prior to the trip, our professor asked if

each of us could buy some school supplies, at our own willingness, to be given collectively to a certain school that we would be visiting. I bought several boxes of wood pencils. The visit took place on our last day in Tanzania, after seeing some of the major attractions of the country such as the Ngorongoro Conservation Area, Serengeti National Park, Lake Manyara and a Maasai village. It was quite a transition from the major to the minor. But what I did not know then was that the experience from the latter turned out to be one of the BIG things that remains etched in my memory. Upon arrival at the school, my eyes had to make some adjustment. The buildings where the kids learned had a very basic look…and feel. Do not expect fancy colors, 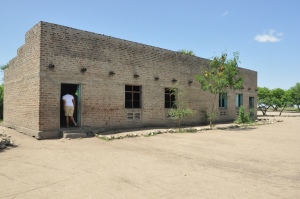 arts, corridors, sophisticated windows…But I suppose a little is better than nothing…our timing was good as we got there while the kids were enjoying their recess. Some kids were acting cool outside, while some others were doing their own things in the classrooms. I found my way into one of the classrooms. I imagined the kids would run away, or stare blankly at me like I was some monster trespassing their territory. They did not. In fact, most of them had a big smile carved on their adorable faces. Some were giggling. They were pretty friendly toward 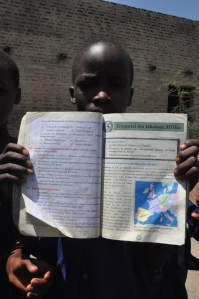 foreigners. I approached one group of kids, took a snapshot of them and showed it to them. Their giggles became louder. They asked for more. I took more pictures for them. The other kids came around me, also wanting their pictures taken. They were excited. I was too. Photography seemed so magical for them. I did not know it could have such ‘happy’ hold over some people. I was pleasantly surprised that the kids’ grasp of the English language was good enough to permit a two-way understanding between them and me… Some kids were eager to show what they had learned, holding their books before me. In fact, they were

competing with each other for attention. I scanned their books. One was obviously related to world geography. I admired them for their spirit of learning, despite the shortages they had. Time passed by so fast…as I was leaving, the kids were following me…I took more pictures of them, and told them to take care till I would see them again (if I ever would…). These kids, as my guide put it, just wanted to have their smiles put in the box. One of the boxes is now sitting in my home cabinet…it displays the beautiful art of his smile.