I can’t argue no longer when people tell me ‘Sometimes things just don’t happen as planned, no matter how thorough the planning was done’. My sister and I had planned to hike Mount Rinjani in Lombok, Indonesia. The arrangement was all set about a month prior to the trip. As time slipped by, our excitement escalated, until about a week before departure when we learned that Mount Rinjani had erupted, resulting in the closure of the entire national park. After much thought, we decided to have the entire plan changed- have a trip to Bali instead (we just didn’t want to go home haha!). All the flights from Kuala Lumpur to Bali were full. Still not giving up, we decided to fly into Yogjakarta and continue to Bali from there. Yes, we got our tickets! We got to Yogjakarta past 8pm, and the flight to Bali was scheduled to leave around 11pm. It felt like a victory to be able to get out of the country! We were already talking about what we could do in Bali, including the possibility of climbing Mount Agung. Our excitement and hope were taken away from us when the airline staff announced that the flight was canceled as the direction of wind had changed, blowing the ash clouds from Mount Rinjani toward  Bali. At that point, I felt like my whole world had collapsed. They informed us that they might fly to Bali the next day around 7am, but there was no guarantee for that. It was all subject to the direction of wind (at least that was the understanding of my felt-numb brain!). We thought they would at least allow us to spend the night inside the airport. But that didn’t happen. There were quite a lot of us being affected. My sister and I tried to find a nearby budget hotel to crash for the night, but all were fully booked. We ended up going back to the airport. That was the only option left for us. As the night wore on, less and less people were seen. I guessed the others had gone to find their respective ‘holes’. In the end, there were just a few of us left. There were steel benches right outside the airport. Yup! they were our beds for the night. There were two gigantic screens displaying advertisements of all sorts, from cigarette to luxury car. The neon lights were so bright and colorful that falling asleep was hard. I tried to visit the dreamland, but neon lights aside, mosquitoes were attacking me from all angles! As the airport was located next to a train track, trains passed by occasionally, piercing the night with their extremely loud presence. It was definitely frustrating. I finally gave up on trying to fall asleep. My sister had reached her dreamland successfully. I sat on the bench and stared blankly at the fierce advertisements that were displayed over and over again. Silence gradually made its presence felt as the night slipped by. I looked around and watched my fellow stranded passengers. There, I saw the boyfriend tried to cheer his girlfriend up by making foolish acts. She laughed. In the end, he fell asleep with his head rested on her lap. There, the husband and his pregnant wife. They seemed to be enjoying their chat very much, like they had not chatted for a long time. There, the elderly couple. The wife was getting ready for ‘bed’, and the husband was sitting, also watching people like me. My heart smiled at those sights. I thought ‘I don’t get to see this everyday. This moment is priceless’. When morning finally came, the magic of the moment disappeared. After some hassles, we were finally boarding for flight bound for Bali. When our eyes met the eyes of those people who had endured the night, we smiled at each other. No words were exchanged. We were still very much strangers to each other, but perfect ones!

When Bali is mentioned, what comes to your mind? Sacred temples? The distinct cultures that are a fusion of Hinduism and timeless traditions? Beaches and waves and surfing? Nightlife and Bintang and mushroom? The little flowers called Plumeria often used in offerings? Or the dark side of Bali bombings? For our recent trip to Bali, my sister and I decided to experience a less-talked-about side of the island: its adventure; more specifically, trekking Mount Agung for sunrise.

Eager to start the ascent when midnight was approaching! If we had only known how tough the climb would be LOL! 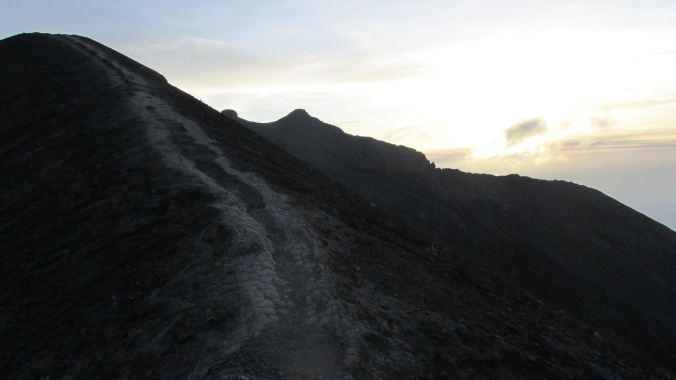 Yay! we are close to the top! The path condition was getting better.

Standing at a height of slightly over 3000 meters, it is the highest volcano on the island, and the fifth highest in the entire country. It took about 2-hour drive to reach the starting point of the trek (Besakih Temple) from our hotel. We were told that it would take approximately 7 hours to the summit, and another 7 hours back to the base. We started our ascent around 11PM. The first part of the journey was relatively easy, but the way up was only getting tougher and tougher. The mountain had very rugged terrains that made the climb very challenging for us. The path was very steep with sand and many loose stones, rendering footing uncertain and unsafe. One slip and we could be thrown down into the void. There were no handrails or little steps built into the mountain to help with the trek.  The only things that helped us up and down were ‘ropes’ made up of pieces of cloth tied together and protruding tree roots.  Carrying 2.6L of water and other necessities in our backpacks just added to the challenge. We took little breaks every now and then. They were truly needed and appreciated!  When we were close to the top, we could see the city lights way down there. Pretty awesome! By the time we reached the summit around 6.30AM, the sun had already risen. The views from the top were just picturesque. Beautiful clouds. Ash clouds from Mount Rinjani’s eruption. Mount Abang and Mount Batur in the distance. They seemed close, but we knew mountains had a way of distorting one’s sense of distance. The wind was howling too. It just felt so good to be way up there with silence and peace all around us!

Mount Abang in the distance

Ahhhhh beauty! peace! silence! Truly beautiful moments (at least for me) are hard to come by! But when you do have them, you know they are always, always worthwhile! 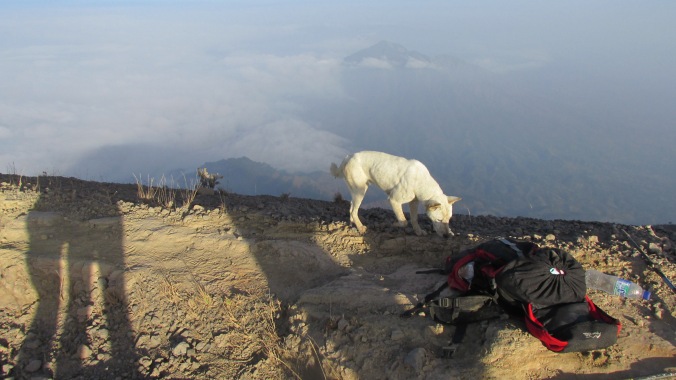 Shuzy’s friend, the friendly dog :). With Mount Abang in the background.

After a light breakfast on top of Bali, we started our descent. It was a lot tougher than the ascent. It felt like it was a never-ending pursuit. My knees felt like they were broken. I could barely feel my toes anymore. One of my toenails was actually crushed. I banged my knees against the boulders twice, and landed straight on my bum a few times. The last few hours of the descent felt like forever. Every step I took was great pain in my knees.

Smile first before starting the descent. There were only 7 climbers (including us) on that day.

Sand and many loose stones made the ascent and descent very challenging. 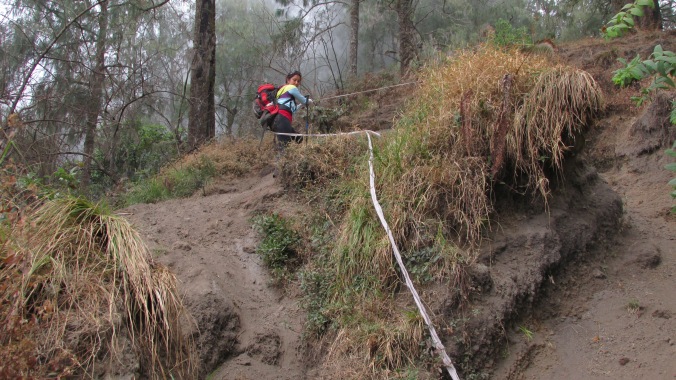 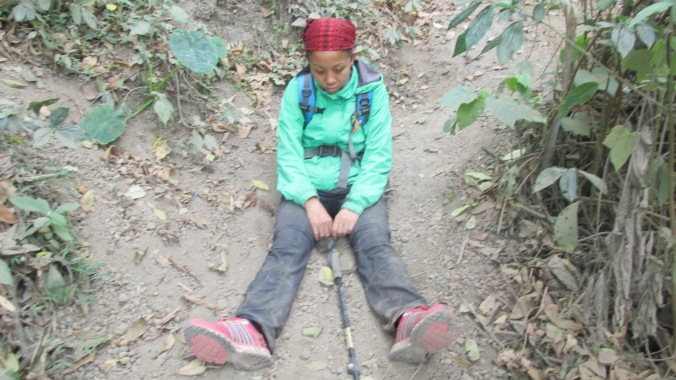 ‘Are we there yet? I’m dying’ Felt absolutely defeated! LOL!

When we finally saw the starting point, the feeling was like coming home after so many years of being gone! LOL! We ended up taking about 16 hours to finish the entire trek. Yes, it was a lot of pain for us. Yes, we did not get to the summit before sunrise. Yes, we did curse when we could no longer bear the pain. BUT did we regret it? NOT THE SLIGHTEST BIT! The entire experience was like once-in-a-lifetime thing. The pain did not last long (especially after a good Balinese massage), but the memories (both good and bad) stayed with us. Whenever I think about Bali now, I remember our journey to the top of this Balinese sacred mountain. I feel like a part of me stays with it for a long, long time. Also, I learned something that I had not seen anywhere else before: the mountain guides made offerings every now and then, a gesture intended to elicit deep respect for the sacredness of Mount Agung! Just beautiful, yes?

A sense of accomplishment at the end of the climb! Hooray! Our guide in the middle, Made. By the way, that’s us in our natural make-up: the dirt! LOL! 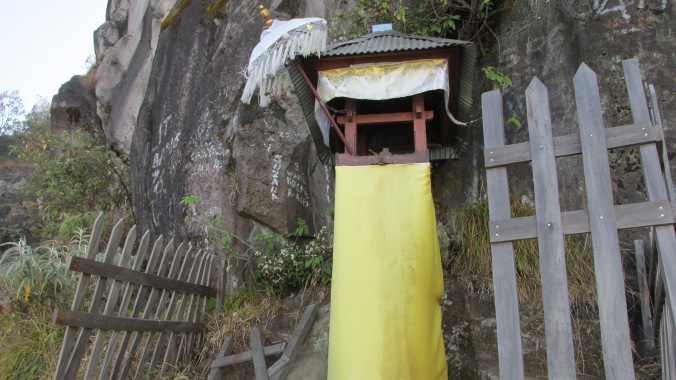 The last offering point just before the summit. Forgive me for taking a photograph.

No littering! There are no trash bins along the path, so carry your trash down with you.

I’d like to think there are different facades of beauty, a word that is very subjective to individual perceptions. Elegant beauty. Cute beauty. Sweet beauty. Strange beauty. Dark beauty. Recently, I got to experience what I’d call dangerous beauty. My sister and I made a visit to Yogjakarta, Indonesia with only one place in mind: Borobudur Temple. However, while we were there, we were introduced to another place that did not previously cross our minds: Mount Merapi, the most active volcanic mountain of the over 130 volcanoes in the nation.

Mount Merapi engulfed in an ocean of clouds!

We read that it was possible to hike to its summit from its north side. Next trip perhaps. We took a jeep tour to a point where we could get a close view of the mountain. It was a pretty cloudy day, unfortunately. So, when we got there, Mount Merapi was hidden by the clouds. We could see only a small part of it.  It was as if it purposefully did not want to show itself on that day. We decided to leave. It was just a few minutes into our journey back when we looked back, and there it was in full view, strong and powerful, beautiful yet dangerous. We could see its summit pretty clearly, with smoke coming out of it.

That’s the top when the clouds were finally cleared! Sheer beauty!

A final look at the mountain.

With the knowledge of its massive eruptions in 2006 and 2010, and the frequency of its eruptions (every 4 – 5 years), I imagined the mountain could now be ready to unleash its might again. After all, it has been 5 years since it last did that. Indeed, Mount Merapi was one of the most beautiful things I have ever set eyes on, so beautiful in a dangerous sort of way.

My sister and I on a jeep, with Mount Merapi in the background. In full view!

An underground place used as a hideout during the eruption in 2006. But the place was covered by burning hot sand and rocks, causing 2 fatalities.

This area was filled with lava flows when the mountain erupted in 2010.