I remember July 20 as a day of colors for me. It was the second last day of our adventure in amazing southern Gobi. The plan was to get to the top of Khongoryn Els, the singing dunes that are up to 300m high, 12km wide and about 100km long, for sunset views of the dunes and the surrounding area. Looking at Khongoryn Els from a distance, they did not seem to pose that big of a challenge to reach the summit. Our guide, Uugii, mentioned a number of times that the climb would be tough but since it rained the day before, the climb should be slightly easier. We got to the base of the sand dunes around 8.03pm. Sunset was at 8.40pm. Looking straight to the top from the base, the sand dunes loomed large and powerful. Some visitors who were already at the top appeared tiny from where I was. For the first time, I felt a twist in my heart realizing I had most likely underestimated the difficulty of getting to the top. 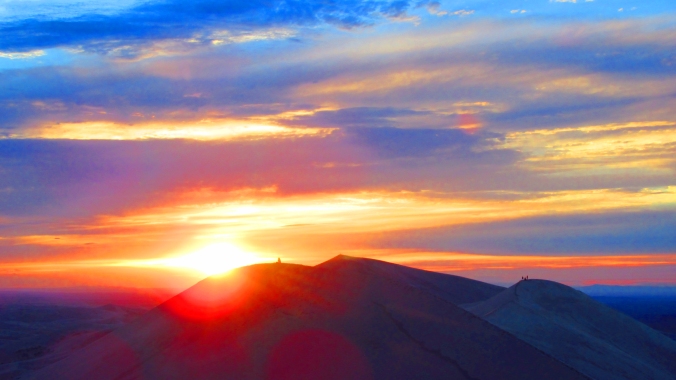 Vivid colors painting the sky as the sun was setting, seen from the top of Khongoryn Els.

Exhaustion started to take its toll on me soon after we began our ascent; every step forward was followed by a significant backslide. I looked up to the top occasionally, and the distance just did not seem to be narrowing. There was also the time pressure to reach the summit before sunset. After about one-third of the climb, trails of previous visitors’ footsteps appeared all the way to the top. Stepping on those footsteps helped me a lot. They acted as little stairs. For this, I profusely thanked the previous visitors for leaving their footprints. They most probably did not realize that their footsteps had helped some tremendously. I guess sometimes our little acts can help others without us even knowing it.

We managed to get to the top around 8.30pm. We had heard that it usually takes 45 minutes to 1 hour to reach the summit. It took us less than 30 minutes so that was something that we could pat us on the back for. We found our own little spot on the sandy summit. As the sun was setting, the colors in the sky were slowly changing. The colors were so vivid that I felt I was in the land of colors. In silence, my beloved friend and I watched the sun slowly sink into the horizon. From a distance, I could see the silhouette of some travelers on the other tops of the dunes. The moment was so beautiful I could not put it in words. It was just something that you would have to experience in order to fully grasp this moment of self-forgetfulness and a sense of great wonder. It was worth every ounce of energy to reach the top!

Some travelers descending the sand dunes. Descent is much easier than ascent. It is a lot of fun too!

Once again, I was reminded that some of the most spectacular moments/experiences are only possible to come by with some time and earnest effort. But every time it is well worth it.

A sleeping camel with Khongoryn Els and mountains in the background. If I were to ride a camel to the top of the dunes, I would make sure I would not get this sleepyhead haha!